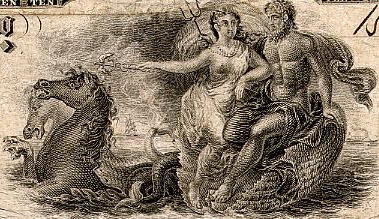 If you take a gander at the posts from the previous couple of days you will see references to Neptune and his bride Aphrodite Salacia.  I love it when I hear about something and the next day something pops up coinkadinkally (sp?).

All things Neptunian are front and center.

Take a look at Astrologer,Phillip Sedgewick’s post (he calls the posts “cosmic blips” ) this morning April 6 2011 — he writes:

As long as we’re talking Neptune it’s time to surface the recently named Trans-Neptunian Body. The object formerly known as minor solar system body 120347, received the name Salacia. Salacia was the unwilling wife of Neptune, prodded by a trident into agreeing to the marital thing after hiding in the depths of the ocean. She refers to calm waters, salt water, sea weed as well as other things especially relevant given the recent goings on in Japan. If you visit the Eris, Sedna etc. link on my website you’ll find some preliminary keywords for her in there. I’m not exactly sure when the name was assigned. I found it last week on the Minor Planet Center’s website when they did a major upgrade just as Mercury turned.

Salacia – Orbital Period: 274.97 yr. The unwilling wife of Neptune, proded into marital agreement with the trident.

And would you believe Salacia and Neptune are from Georgia?  Macon, Georgia

Beautiful Note from the Ocmulgee Bank of the State of Georgia issued in 1837. This historic document was printed by the Rawdon, Wright & Hatch Company and has an ornate border around it with a vignette of Hippocampi pulling a shell chariot that holds Neptune and Salacia. This item is over 172 years old.this 10 dollar bill is for sale at:  Scripophily.net

Sail on dear friends–Neptune will be in Pisces and with us for a verrrrry long time.

And this is not a post of a salacious nature.  I don’t think.  🙂

2 thoughts on “Salacia and Neptune are from Macon, Georgia”