With all this rain, earthquakes and tsunami warnings, nuclear power plants, radiation being poured into our ocean—I said to my friends this morning that I feel more like I’m being “washed in the blood of the fishes than the proverbial blood of the lamb“.

Marcia wrote and said –and I quote: Heh: your ‘blood of the fishes’ comment actually reminds of the ending of La Dolce Vita (the finale). Remember? Remember when the crowds make their way to the beach to see the huge fish?  Remember Fellini?   Remember that movie?   Whew!  The haunting music lives on as well as those incredible archetypal images about Cetus the whale—as in scary archetypal monster from the deep. (a story for another time but oh so applicable to these times)

With all the planets visiting the stars of the fish and with Neptune moving today into the sign Pisces — ok well – I went to see what Bernadette Brady says about those fish. I mean what with Jupiter, Moon, Mercury, Sun, and Mars and Uranus all dancing there in the sky these days.  AND Neptune moving into the sign Pisces for the first time since the Civil War!!  What was I trying to remember with that statement? 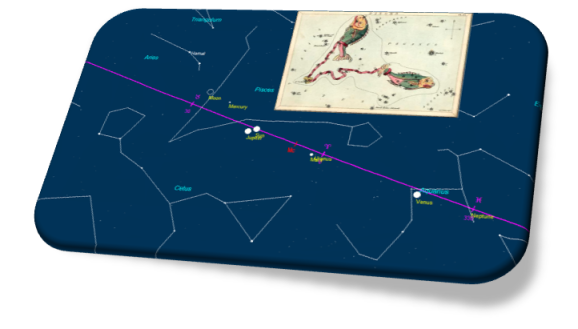 Ahhhh—yes—now I remember—the reason that phrase popped into my head has to do with the ancient sacred rituals of washing away sins, of renewing self and others by being ‘cleansed’ in holy life — blood.  The waters of life.  Water at Baptism.

I now know that when the Constellation of the Bull (Taurus) was rising at the Equinox, folks were “washed in the blood of the bull”—

The Egyptians also annually slew a sacred bull in atonement for the sins of the realm. The concept was that the blood of one god, or the symbol of that god, could cleanse the sins of many. However, after two thousand or so years the spring equinox slipped from Taurus, the Bull, into Aries, The Ram, and this heralded the birth of yet another new god, this time emerging from the Israelites. They distinguished themselves from the bull-worshippers by using the blood of the lamb as a sacred fluid and symbol. For Moses was leading his people,chosen with lamb’s blood, to a new religion. This was the new world age marked by Aries and thus a new god was required. (Brady, Starlight software)

Pisces began to receive the lead position in the Zodiac around 2,000 years ago when the spring equinox heliacal rising slipped from Aries the Ram to Pisces the Fishes. However this was never a clear distinction, as Pisces is such a large constellation and its two fish reaching through the sky actually encompass the stars of Aries. The coming of the age of Pisces, the new world order, was eagerly awaited as it was heralded by a triple conjunction of Saturn and Jupiter in Pisces in the year 6 BCE and Virgil, in his Fourth Eclogue, announced it would be the return of the Golden Age. This conjunction was the astronomical highlight of the time, eagerly awaited and then watched and was later named, in Christian mythology, the Star of Bethlehem.
But the fish was an ancient symbol long before it was adopted by the new god. The Greeks incorporated the Fish as a sacred symbol through Aphrodite in her form as a fish-goddess called Aphrodite Salacia.

She was often depicted as a fertile mother nursing a child and her temples always contained ponds of fish. Her followers would eat fish on her holy day which was Friday. They were known as the fish-eaters and this custom was adopted by the Catholic church who decreed that the eating of fish on a Friday, translated as the abstinence from meat, was a holy act that had to be performed by its followers.

As the spring equinox moved into Pisces, the Ram-god sent his Son, Christ, to save the world, and he became the god of fishes. He was a fisherman fishing for men’s souls. His disciples were fishermen and his miracle, which proclaimed him god, was the miracle of the loaves and fishes where he was said to have fed five thousand on just a few fish. The new religion adopted the sign of the Fish as their symbol.

Read on dear students of the stars–the following is a good cut on what is going on:

…many forms of creative experience that we were told are useless (as kids) are some of the best that Pisces has to offer. By that I mean everything but social studies and accounting: the stuff you do with your imagination and your hands. Your talents and your desire to express your imagination may be coming under focus now. That would include music (to create the stuff, or at lest to experience some in person), as well as your poetic senses. And what about those paints in your closet? What about the art supply store down the street? You DO have time to experiment and play, and now the astrology is floating you like the tide rising beneath a boat.

Pisces is also the sign most associated with clairvoyance (Scorpio would be a close second, and these are two signs that usually get along nicely). Just wondering — have you been experiencing any enhanced non-physical communication? Any premonitions that have come through, or out-of-body communication? Have these events involved fantasy, imagination or creativity? I’m suggesting here that there may be a connection between what we think of as out-of-body communication and many of the other ideas that Pisces or Neptune represents.

Then there is water, the actual stuff that comes out of the shower nozzle. The same stuff we expect to just be there. We see a lot of water when we fly across the ocean — but that is not the kind of water we need for our individual bodies to survive. Less than 1% of the earth’s water is drinkable fresh water and that is going away fast. It’s also becoming one of the biggest businesses around; the World Bank and many other institutions have been muscling in on this for decades. So Neptune in Pisces is likely to call even more attention to this issue than we’ve been seeing in recent years, here as a nuclear complex in Japan is dumping tons of radioactive water into the ocean and groundwater.

We got our first really big lesson about this last year when — as Chiron entered Pisces, on that very day — the BP oil spill happened. When Uranus left Pisces two weeks ago, the earthquake happened in Japan. So Pisces seems to be sensitive to global changes involving water. Now, we need to get there. Astrology is suggesting that now it’s our turn